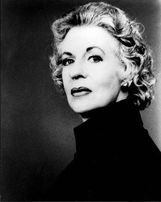 Uta Hagen
Every movement on stage must be motivated! Producer and director Arthur Hopkins once said, "You walk because you have a purpose." There must be a logical reason for every move. Some things are intended in the script e. g. the phone rings and the actor will pick up the phone. However, the vast majority of movement is not given in the script, but develops from the action of the story. This fundamental principle is often ignored in amateur productions. Often movements are simply the result of the actor's nervousness.

Stand still and avoid shifting weight. This is another fundamental principle which is often disregarded. Especially beginners often feel uncomfortable and unnatural on stage. This raises the question of what to do with the arms and hands. It's okay, just to stand still with your arms at your sides. An actor must be aware that every movement attracts the attention of the audience and draws focus.

«Not rarely an inexperienced but keen actor rehearses the script with the supposedly appropriate intonation even before he or she comes to the first reading rehearsal of the play, and this can be fatal for the performance. In the rehearsals, he may try to understand and include the intentions of his character and to receive those of the speaking partner, but he will nevertheless always fall back on the pattern of mechanical textual recitation with which he began. We have to find out what our character wants and who he or she wants something from if we want to create an authentic verbal action.​ Physical action creates the necessary balance for verbal action. When the actor on stage is truly alive, there is an endless variety of interactions between verbal and physical behavior. Ideally, the viewer should not be aware of whether the actor is walking when he or she is speaking or talking when he or she is walking!»[1]
Something interesting from the research: By clicking on the link below you will see different walks that you can influence with male-female, light-heavy weight, nervous-relaxed, sad-happy. You can then watch the walk as it changes. The movements of 100 male and female persons were recorded. So it's not just a computer simulation, it's a motion capture.
Body Posture - Walking Style
Subtext
The subtext is the thought that resonates with the text, what you think when you say a phrase. The subtext includes what the speaker actually wants to say, but does not say out loud. The intention is revealed in the subtext. This is the true meaning of what the character actually thinks and wants to say (the implicit message).

«The average actor delivers the text. The good actor plays both the text and what the character thinks as he or she is speaking. With every sentence I have to know exactly what I actually want to say.»[2]