The art of acting

«Actors are artists who, with language, facial expression and gestures, play a character - usually another person. Actors are individuals who work (professionally or as hobby) in theatre, film or television under instructions (script, direction) or improvising in their specific form of performing arts.​»[1]

As an actor we have the power to touch the audience deeply. Good acting skills are supporting and maintaining the effect of the "willing suspension of disbelief". This means that the audience can get involved with the characters and the story and eliminate their doubts that everything is only "played" or an illusion. They are ready to immerse themselves in the reality of the story. This is easier for the audience if the characters are represented authentically and the story is coherent in itself. In action films which overload credibility, the viewer catches himself questioning what he has seen ("Oh come on, that wouldn't have been possible.") or thinking about what special effect this was achieved with - in other words, he is kicked out of the story.

Therefore, the actor must strive for complete authenticity and use all the techniques of acting as well as his creativity and naturalness.​ 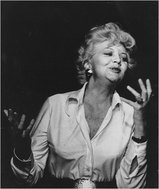 Stella Adler
Just as music can bypass our minds and touch us deeply and emotionally, so can the acting as a work of art also break through our defensive mechanisms and hold a mirror in front of our soul.

«... (They) must first learn what theatre can stand for. And how much it can mean. (...) The word "theatre" comes from Greek. It means the seeing place. It is the place people come to see the truth about life and the social situation. The theatre is a spiritual and social X-ray of its time. The theatre was created to tell people the truth.​﻿»﻿[2]

But it also applies: «Art does not teach, but opens up the perspective. It's more about enlightenment than lessons, more about celebrating than convincing.»
James Young, Director

Does a talented actor even need a method? Counterquestion: Does an intelligent child need a school? Every art, even that of an actor, has its professional technique, its principles. Only by learning the craft talent can be developed (see also musicians, painters, dancers, architects, etc.) Without education and appropriate training, talent cannot or hardly develop (10% inspiration, 90% transpiration).

«The only thing worse than no drama is ... BAD DRAMA​!»[3]
«I wish the stage were as narrow as the wire of a tightrope dancer,
so that no ​incompetent would dare step upon it.»
Johann Wolfgang Goethe in 'Wilhelm Meisters Lehrjahre'
[1]﻿ Definition according to Wikipedia
[2]﻿ Stella Adler, "Die Schule der Schauspielkunst", Henschel Verlag Berlin
[3] Steve Pederson, "Praxisbuch Theater", Gerth Medien Asslar﻿
Methodology